With further discord occurring within the Middle East, extending and crossing borders and a new chapter in the Palestinian-Israeli Conflict upon unfolding, it has never been more important to show and promote the other side of the region: namely the People, as well as its diverse culture, history and geography etc. Living outside of the … Continued

Over the last fifteen years or so, there has been a buzz around Iranian cinema, albeit arguably quite a modish interest in a country otherwise so hidden from view. Praise has been heaped upon the likes of Abbas Kiarostami, Jafar Panahi, Asgar Farhadi, and the Makhmalbaf family for their contributions to the ‘New Iranian Cinema’ … Continued

Introduction The convolution of the Kurdish national political dilemma with the division of Kurdistan amongst Turkey, Iran, Iraq, Syria, Armenia and Azerbaijan had convinced many a reunited independent Kurdistan to be an epic dream. This pessimism was running high during the Cold War era. The States sharing major parts of Kurdish land were divided along … Continued

Three years after the beginning of the Arab Uprising, and despite numerous supposed false dawns since, there remains little reason for optimism in Syria today. In Cocoon, Paris-based artist Walid El Masri’s intricate reproductions of the dormant subject matter serve both to evoke the isolation and withdrawal prompted by the ongoing bloodshed in Syria, as well as coaxing out a deeper meditation on the wider life-process. While El Masri’s first solo exhibition in London is undoubtedly challenging, the strength of his work as a totality reveals itself in the lingering sensations of unsettling horror and flickering beauty which remain long in the memory. 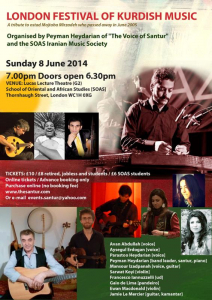 Following a random invitation by an oud enthusiast, I found myself attending the London Festival of Kurdish Music by the SOAS Kurdish Band and Peyman Heydarian. Although, often receiving many similar invitations, I generally do not attend such events due to workload. However, I was familiar with the oud player, Francesco Iannuuzelli, who is currently … Continued

Introduction The on-going civil war in Syria has cost over a hundred thousand lives and created around ten million refugees, with the consequences of the conflict spilling over into the geo-politics of the region and further disequilibrating the balance of power in world politics. It is impossible to say what the results of the current … Continued

When Mohamed Bouazizi, a street vendor who hoped to someday own a pickup truck, set himself on fire in rural Tunisia on 17th December 2010, following perceived harassment from a police officer, few imagined that his sacrifice would lead to a functioning constitution for the Tunisian people. As the world was riveted by the events … Continued

The idea that multi-national states have indeed been proven to fail in the on-going Arab Spring, will stand as the premise for this article, and the work will analyse why any option for one-state, arguably an acceptance of the status quo, will fail. The article will also look towards Israel within the newly established Islamist … Continued