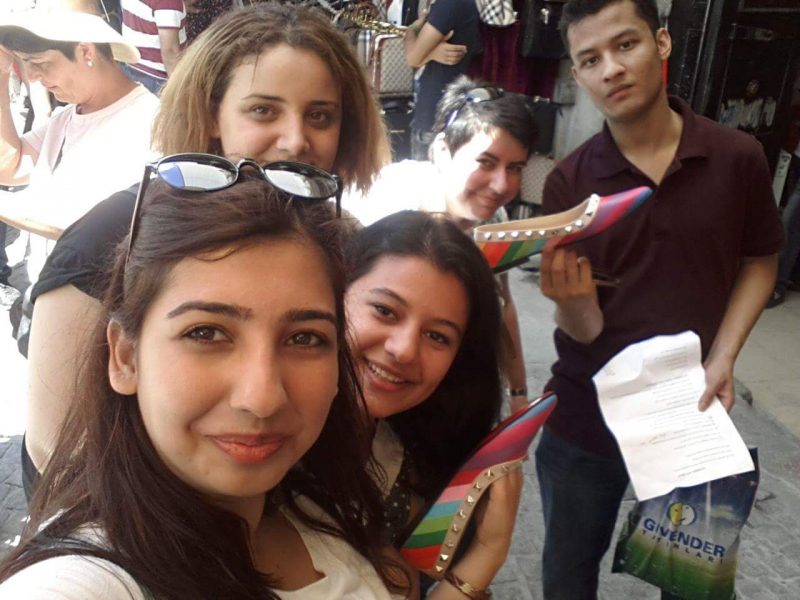 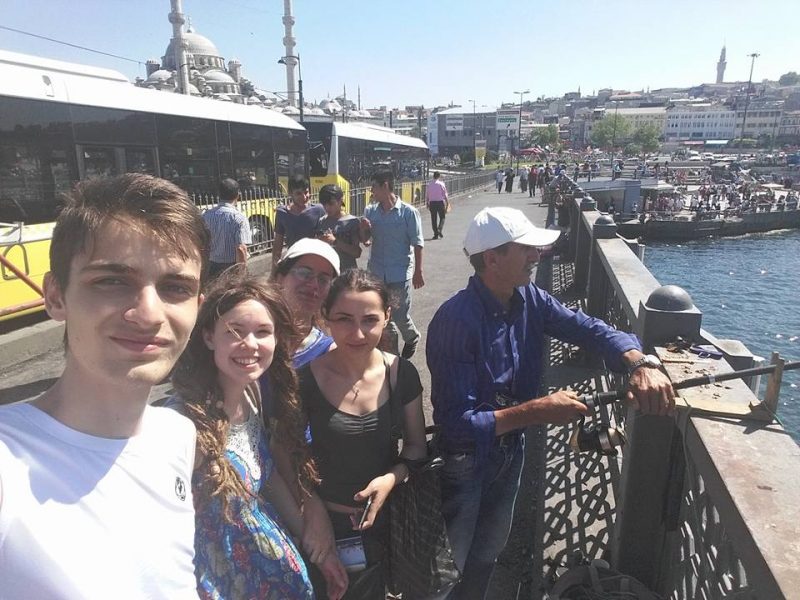 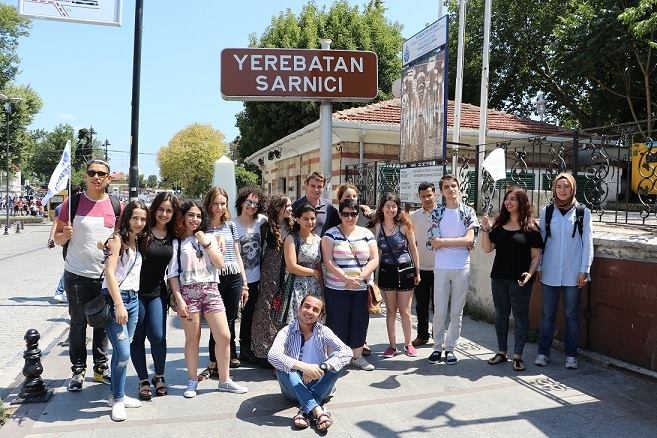 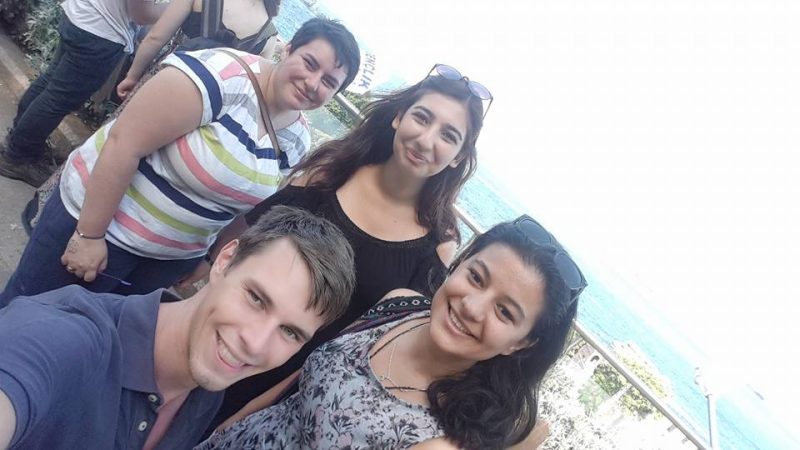 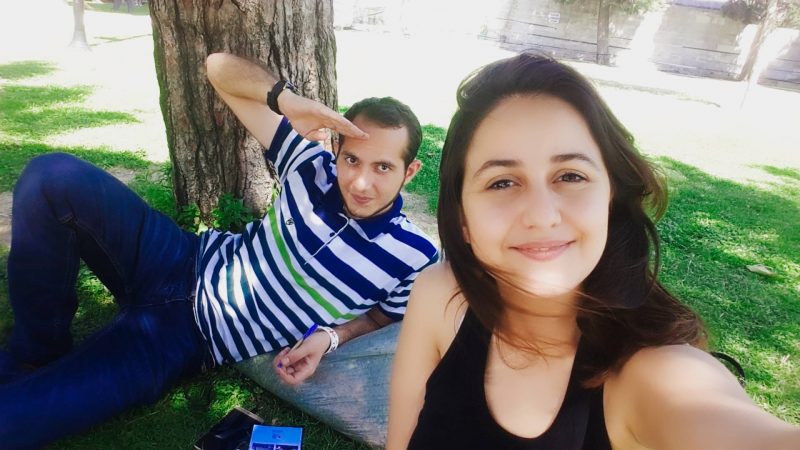 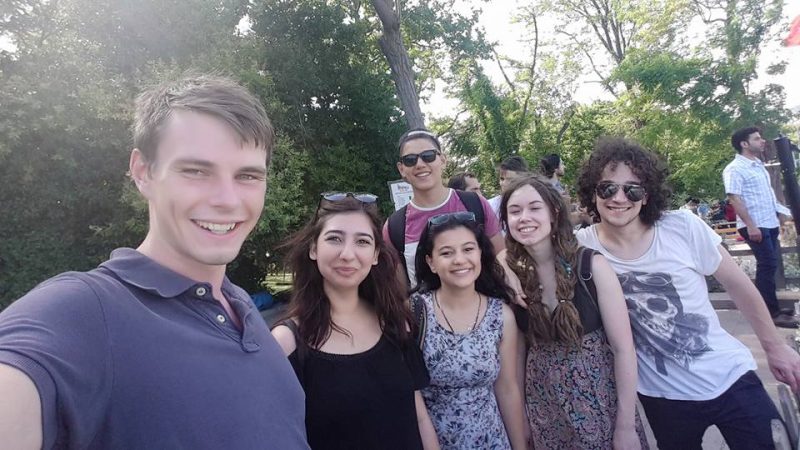 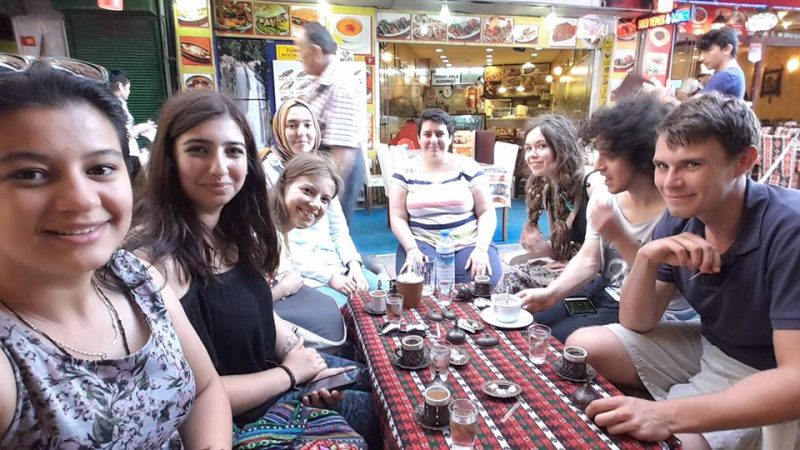 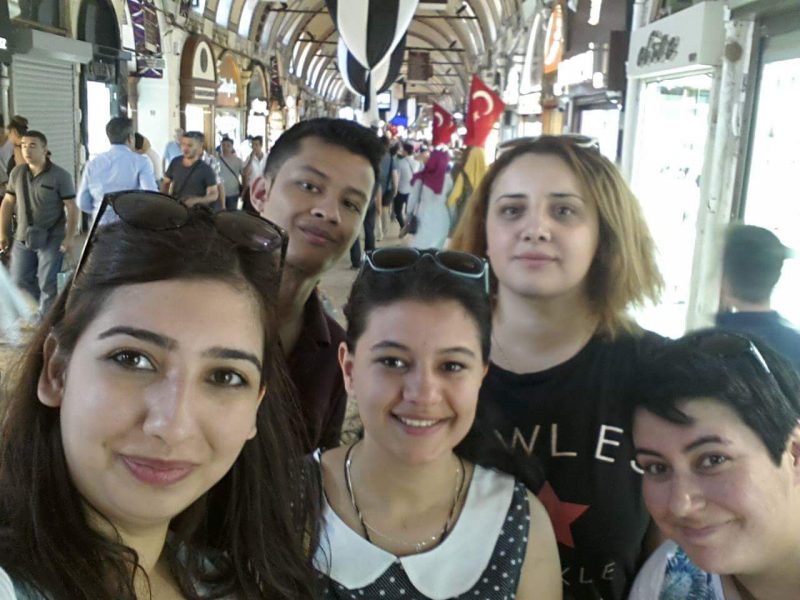 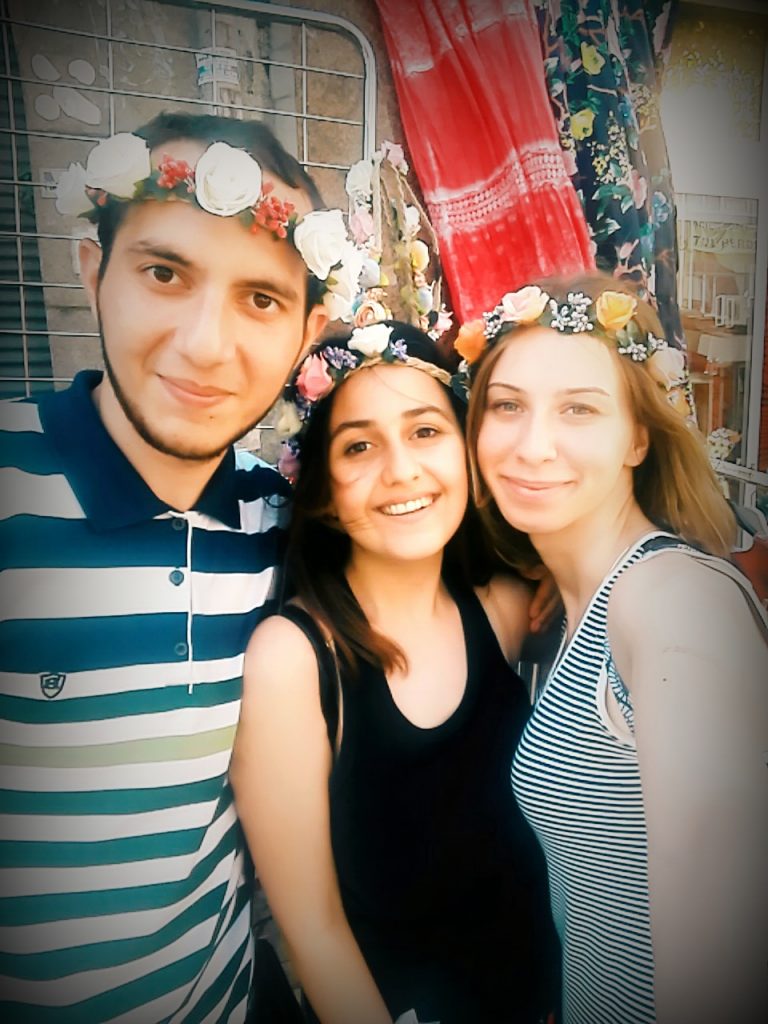 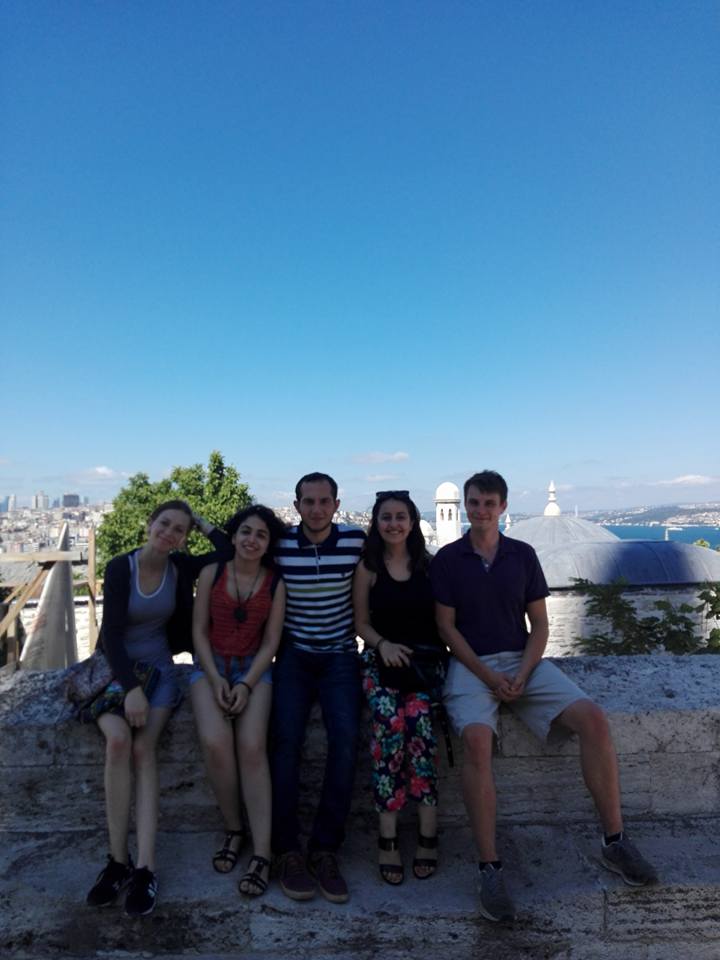 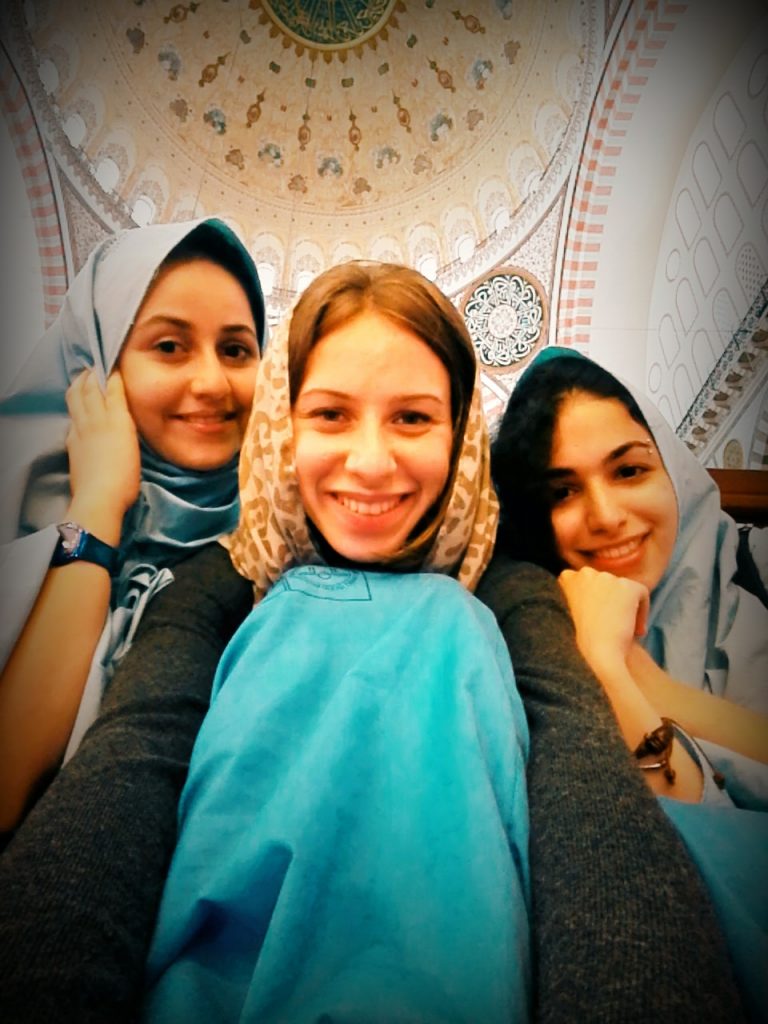 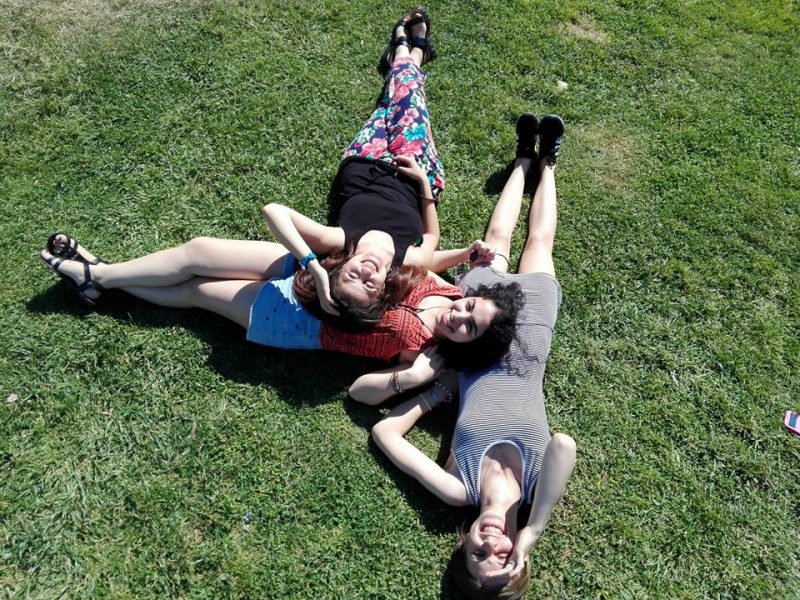 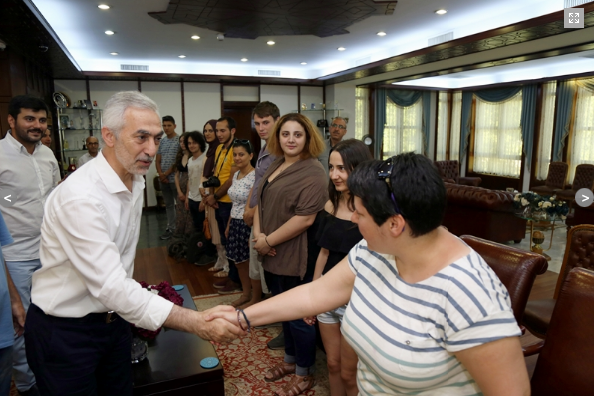 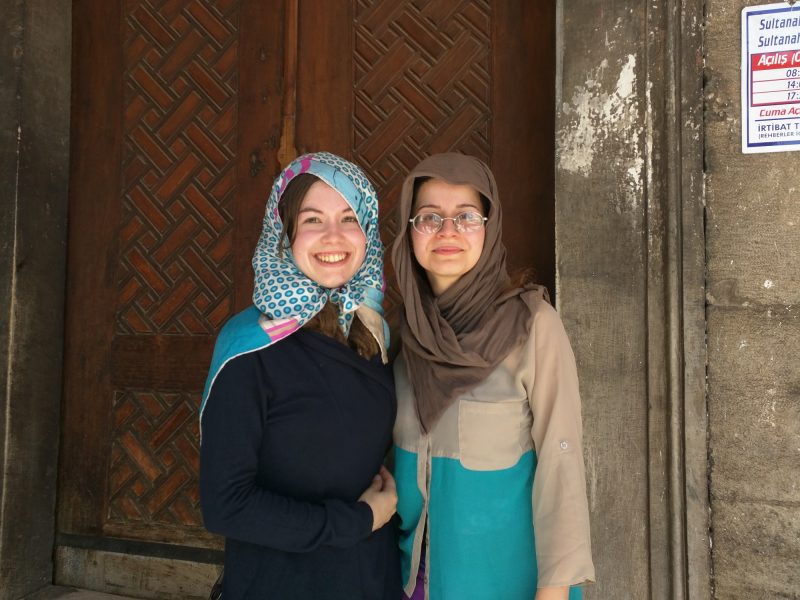 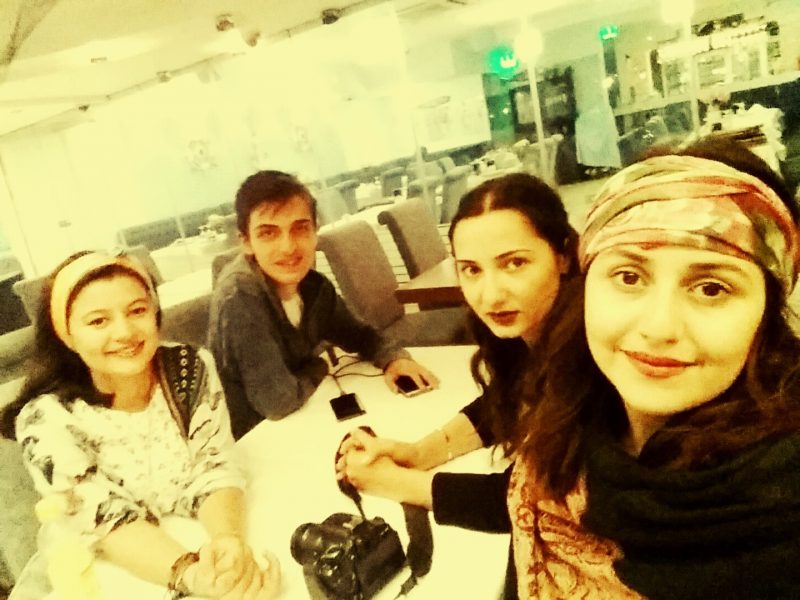 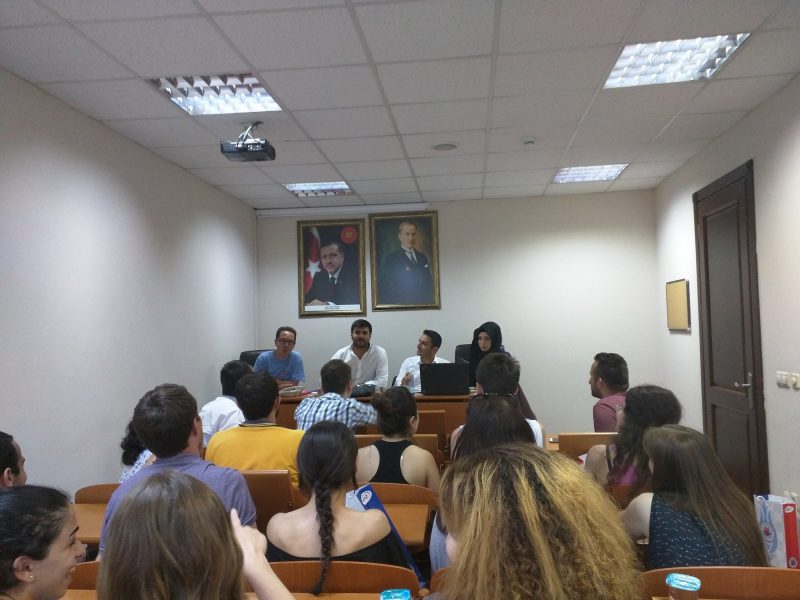 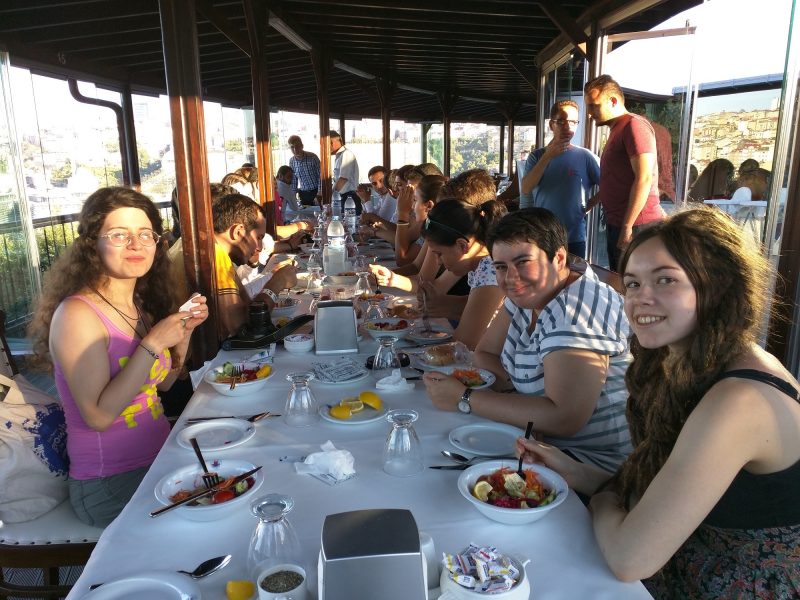 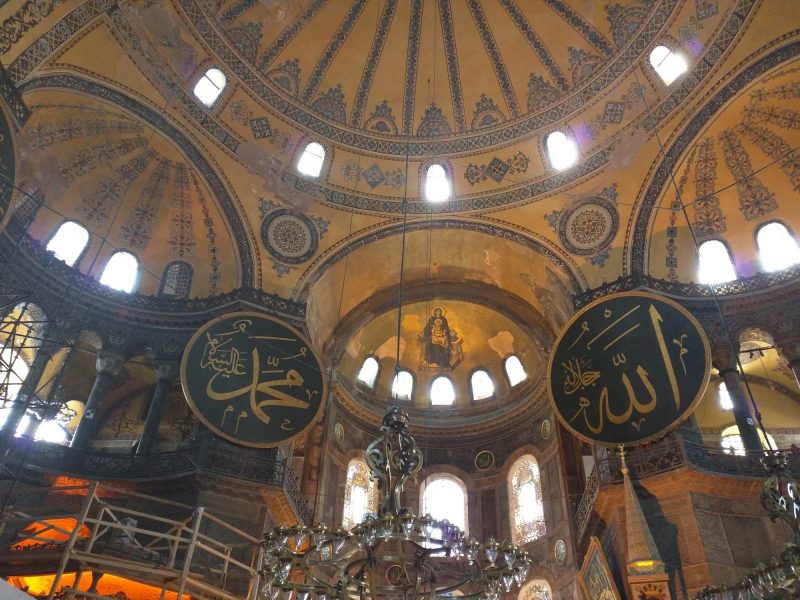 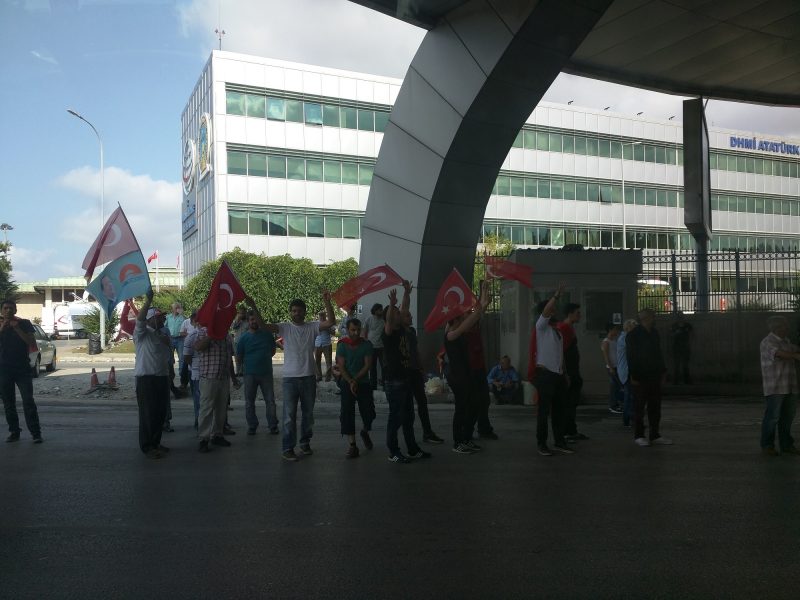 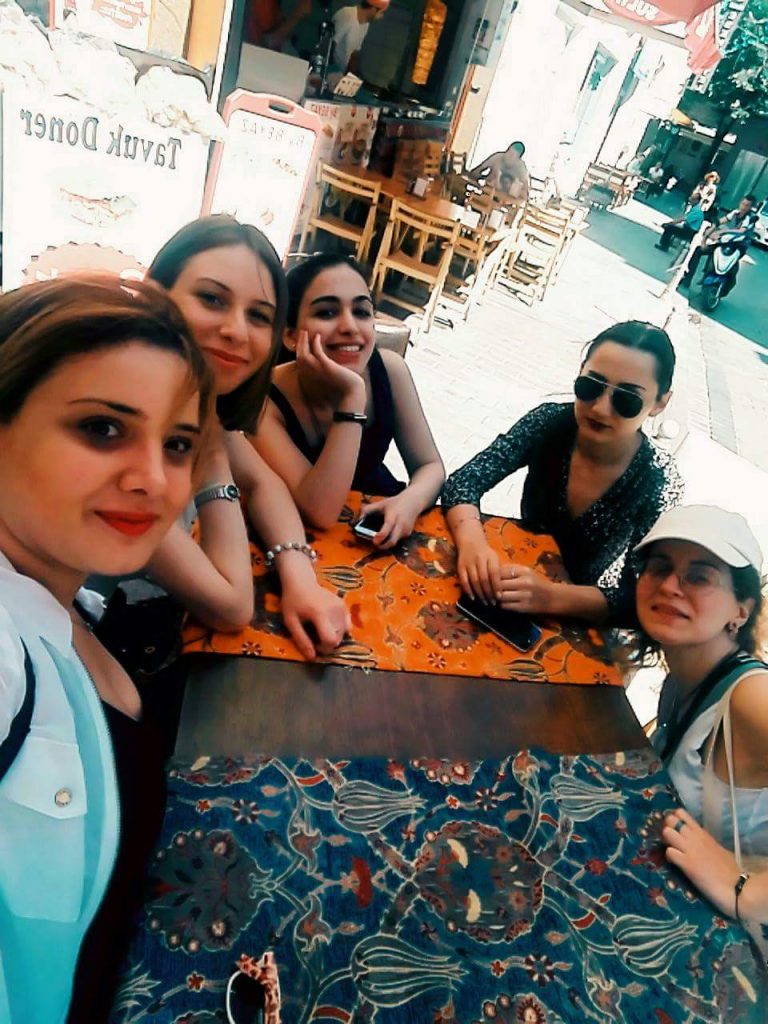 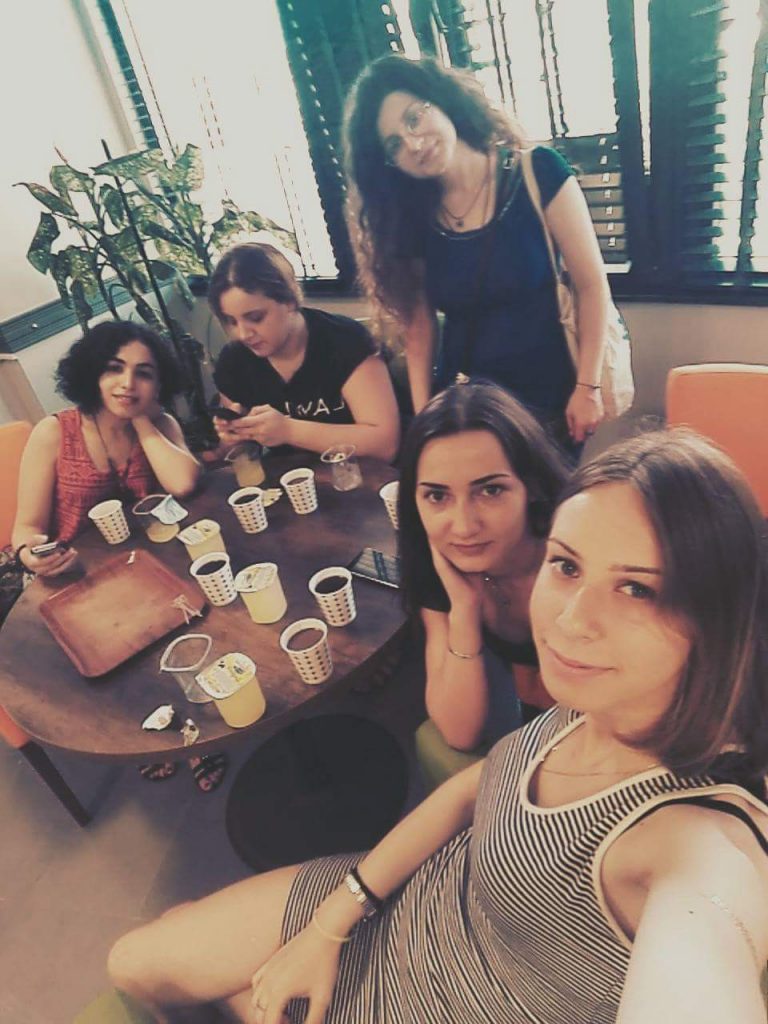 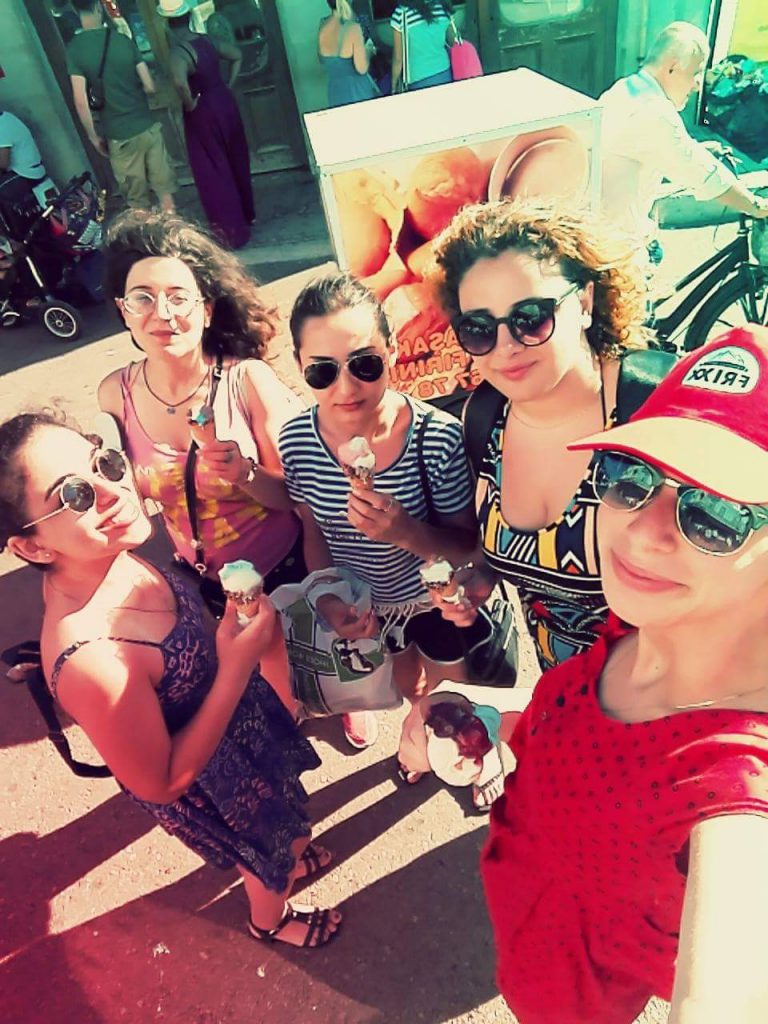 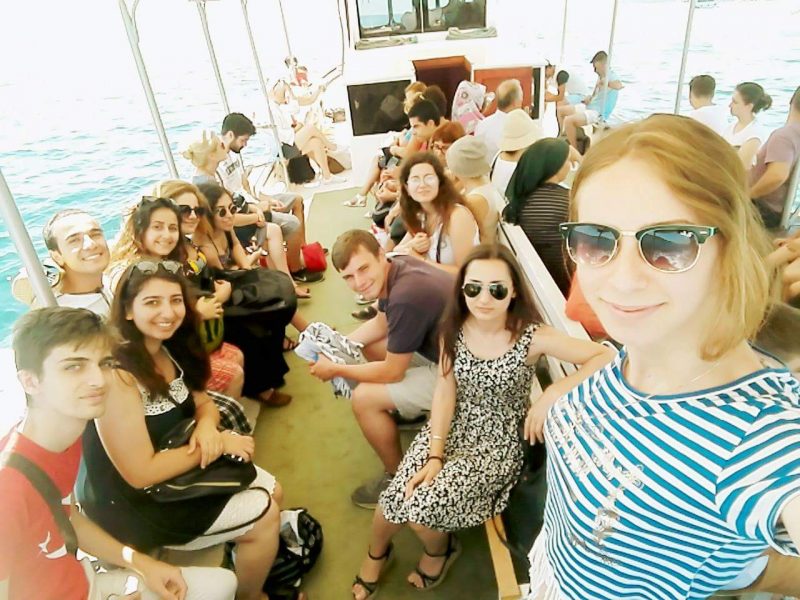 Between June and September 2016, Asfar organised 7 Erasmus+ funded youth exchanges, including to Turkey, Israel, Macedonia, Serbia, Azerbaijan and Bulgaria, as part of Erasmus+ Evropa2Evraziis; Europe, Gallipoli and the Arab Revolt and S4C.

Each one of Asfar’s youth exchange activities brought together diverse groups of young people to develop new skills, experiences, mind-sets and ideas about different countries and cultures, while inter-culturally engaging.

One youth exchange in particular, developed a wider set of skills, a unique experience and long lasting friendships, which went above and beyond the official timetable.

After a number of terrorist attacks in Turkey throughout this year, by July 2016, partners and participants alike wondered if our two youth exchanges due to be held in Istanbul and Canakkale in the summer, would proceed.

After liaising with the hosting partners and considering our own experiences in Turkey and the wider region, Asfar’s team decided to proceed with both youth exchanges. Partners were assured as much as possible, and by 11th July, I found myself plus 4 UK young people flying to Istanbul.

The first couple of days, were like every youth exchange: icebreakers to encourage engagement between participants; workshops; scavenger hunt around the city; meetings with local politicians and decision-makers etc. By 15th July, the week was heading to a close. We got back to our hotel near Gulhane Park at around 9pm and spent sometime in the hotel’s Nargile café (Shisha/Hookah café) drinking tea. At around 10.30pm, some of our group headed off to Taksim for some evening entertainment, while the rest stayed in the hotel or continued to sit in the Nargile café.

The first inclination that anything was wrong, came when one of the host team leaders received a call from a friend to tell them that the bridges were shut down because there was word that a a terrorist attack was going to hit the city. This inevitably caused some worries, as at least 2 Turkish participants would not be able to get home until the bridges re-opened.

At this point, I made my way up to the roof garden to see if any of the groups were still awake and to ask them to let their parents know that they were safe.

By the time I got up there, a number of planes and helicopters started to fly low throughout the city, making an awful noise. I advised the few participants on the roof about the bridge closures. At this point, we all started to use our mobile phones to follow the latest news on Twitter/facebook/the Guardian website/Reddit etc. and it soon became apparent, that this was not a suspected terrorist attack but rather, a successful military coup. We quickly let the guys in Taksim know of the situation, especially when it was confirmed troops were in their area.

We continued to sit and discuss and watch the planes fly over our heads until past midnight. Then after some persuasion, the youngsters went to get some sleep. I continued to follow the news in my room, the strange feelings of surprise, shock and fear of what would happen next preventing me from getting any sleep. By 1am, I started to receive chains of messages from over 10 people, all wondering how I am and also sharing information. Every time my mobile pinged, I urgently read the updates. The group from Taksim eventually got back to the hotel, safe and at around 1.30pm, I received a phone call to come down to the café to speak to the Turkish group leader. Expecting a team leader meeting only, I was surprised to find that all the participants had been woken up and invited to the meeting.

We discussed the events, and it became clear that there was little to be done until morning, as by this point, the government was refuting the claims of a successful coup. Most of the young people appeared calm on the surface, but I soon discovered that this probably was not the case. I decided to head to the Bank machine to get some cash, as there was news that the bank machines were to be closed by the military. One of the young people came with me. On the way back, they became quite stressed, suggested that the situation was turning into Syria and that we should head towards Greece as soon as possible. I tried to calm the young person down, explaining that if we tried to leave this part of Istanbul, we would not know what was round the corner and with not being certain of what travel options are still open, it would be unlikely we could reach Edirne, the nearest crossing to Greece, which by this point may have even closed its border with Turkey.

We went back to the hotel and after a little persuasion, the young people went to their rooms, although I doubted whether anyone actually slept, as most were receiving frightened messages and calls from family members.

I tried to get some sleep, realising that tomorrow would be a very busy day. By this point there was so much confusing information from the Government and the military that we really did not know what to believe.

By 2.30/3am, I had given up sleep because the aircrafts above were flying so low, I feared one would eventually crash. I walked to by window and looked out, although knowing I would see little as the window lacked any real view beyond the wall of the building next door. At that point, there was what I thought was an explosion. Either from artillery or even a plane, I did not know. But for 10 seconds I stood in fear, and then I rushed to grab my essential items. After 20 seconds from when the explosion first happened, my fear subsided and I was able to think rationally and headed down to the café, to see what was going on down there and if the participants were awake.

In the café, there was just panic. Young people from Turkey, Georgia, Azerbaijan and the UK were white as sheets, some crying, others had taken ill. We had also acquired a number of visitors from neighbouring hotels, which lacked a communal area or television set.

As the news blared out, including Erdogan’s Facetime message in Turkish, team leaders tried to reassure the young people who were downstairs. Most were convinced that the Turkish Airforce had just dropped a bomb in the Sultan Ahmet district, which they communicated back to their worried family and friends via Facebook, Twitter and Instagram. Although, it was later confirmed to be just a sonic boom.

There was a great deal of disorientation and just when it seemed one group had calmed down, something else would happen or a piece of news would come through and everyone would be upset again.

At one stage, a number of Georgian participants were convinced that they would be targeted because they were not Turkish and were Christian. This misinformation, actually originated from family and friends from Georgia, rather than any incident occurring on 15th July 2016. However, with a wide range of Media platforms reporting a wide range of different reports, a lot of things were believed which lacked any evidence. For one of the Georgian participants, just the noises from the planes above Istanbul, brought back memories of the Russian invasion of Tbilisi in 2008, which she had experienced as a child. The events affected everyone differently.

But 5.30am, almost all of the participants went back to bed.

After a short sleep, I got up at 8am to see if anyone needed any support, whether emotional or just guidance on contacting their embassies. By this stage, it became clear that the attempted coup was unsuccessful. Most of the young people did not get up until after 12pm, which by this point things had slowly calmed down.

Sultan Ahmet, normally a bustling tourist area of Istanbul on a Saturday was very quiet. Embassies were advising tourists to stay in their hotels and even the Grand Bazaar was shut. By 4pm, many locals were taking to the streets to gather in Taksim Square to show their support to the government.

Our final day of the programme, mainly involved most of us hanging round the hotel or Gulhane. And on the evening we had our farewell party. Unlike, any other youth exchange or youth programme, I have experienced, our group had become very close, especially in the last 24 hours. And so the party was a special occasion for us all.

Thankfully, we were all able to leave Turkey on 17th July, with no delays or flight cancellations. In fact, the UK group, actually left slightly early, something I have never experienced at Ataturk Airport before.

15th July 2016, was a shock to the Turkish national conscious, resulting in a very successful, government controlled peoples’ revolution. People chose their leader, even an authoritarian one, to ensure their democracy. However, the increase in authoritarianism is as frightening as the attempted military coup.

Asfar’s experience of this, not only affected one of our youth programmes, especially young participants involved, the attempted coup and Erdogan’s reaction, continue to affect our partners, many of whom work in Universities.

In one instance, our partner was unable to participate in a transnational meeting due to travel bans on certain academics. While the same partner was unable to send participants to a youth exchange we were managing in September, because participants feared that if they left the country, they may not be able to return, while others did not wish to be associated with the partner in case they would be purged in the near future.

Turkish young people, especially those who are not pro-Erdogan and AKP, are receiving the brunt of the reaction: 15,200 teachers suspended; over 21,000 teachers in the private sector have lost their licenses; all deans in state and private universities, numbering 1577, were asked to resign; over 600 private educational institutions were made to shut down. This was followed by a further 1,000+ schools, over 1,200 charities, and 15 universities shut down within 10 days of the attempted coup.

As a young person in Turkey, whether it be the suspension of a favourite teacher, the loss of funding to assist their studies or the closing of their educational institute, the purge on education is a significant problem to their long term development. And the question is, will these young people be stigmatised because of their relationships with these teachers, academics and universities in the future?

At this stage, no one knows.