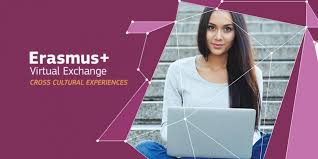 It is revolutionary: an innovative possibility to share different views, learn from each other, and better understand different perspectives, a young Erasmus+ Virtual Exchange participant explained.

Since 1987, when the Erasmus project started, 9 million people have taken part in it, according to data collected by the European Commission. It might be considered as the most successful European project in terms of participation in the last 30 years. The real turning point came in 2007, when the programme was extended beyond Europe’s borders. Thus, since 2014, Erasmus+ has included all the initiatives of exchange for studying, teaching, professional education, volunteering and cooperation between young people in Europe and neighbouring countries to equip them to collaboratively respond to global challenges.

In 2018, a virtual version of the programme was launched on the European Youth Portal with the aim to use technology to facilitate new occasions of exchange and to open cross-cultural dialogue opportunities to the Mediterranean, with Algeria, Egypt, Israel, Jordan, Lebanon, Libya, Morocco, Palestine, Syria and Tunisia as pioneers. So far 3265 young people have participated in virtual exchange activities this year, and the target of the pilot project is to reach 8000 by the end of 2018. “It is a great possibility, something really new. It cancels barriers of movement or of budget. It is a safe and comfortable space that can include people usually excluded, especially in developing countries”, one of the participants told us.

In 2011, during the Arab Spring that swept across North Africa and the Middle East, the European Commission highlighted the need to raise the funding for Erasmus+. Thus, the Mediterranean Universities Union (UNIMED) association, which includes 108 universities in 23 countries, launched a petition in December 2017 to ask the European Union to increase the number of scholarships for EU-Mediterranean exchanges to 30,000 between 2021 and 2027. This is particularly important in the current context of stigmatization of migrant flows by xenophobic right wing parties all over Europe which try to impose limits on the mobility of youngsters between North Africa and Europe.

Things seem to be going in the right direction with the European Commission proposing to double funding for Erasmus. For the 2014-2020 programme it was €14,7 billion, the proposal is €30 billion for 2021-2027. Erasmus+ Virtual Exchange has the potential to increase the numbers involved by reducing barriers to participation and involving more young people on both sides of the Mediterranean, including those with fewer opportunities such as young refugees. This is done by partnering with NGOs such as Kiron, who work specifically to enable access to higher education for refugees, and by designing virtual exchanges which engage refugee and non-refugee youth in dialogue, such as the “Refugees in Europe” course, or the upcoming “Newcomers and Nationalism”.

However political and cultural barriers remain, as is clear from the decision of the Northern League, political party of the Italian Interior Minister, Matteo Salvini, to stand against the extension to the Erasmus programme, both virtually and in person, to North African countries.

A Programme for the Youth

We listened to the first experiences of some young participants in Erasmus+ Virtual Exchange as part of a project of evaluation of the experiences of virtual exchange that the University of Padova is developing together with other European research institutes. All the interviewees confirmed that, taking part in the programme, they had a good experience of Virtual Exchange in terms of building cross-cultural relationships. “It has really been a good experience, we are still in contact with other participants. I was the only refugee of my group and I was very interested to know the experience of the others: It was very emotional,” one of the interviewees confessed. The interviewees are the pioneering young participants of the project, coming from 44 target countries from both sides of the Mediterranean Sea, including refugees living in Europe or wishing to come to Europe. Accessing an online platform, through youth associations and universities working both in Europe and North Africa, they meet each other during sessions dedicated to different topics of concern.

Some of our interviewees added that this experience challenged stereotypes. “It improved my communication skills a lot — we learned not to judge the others and to walk in their shoes. We acquired capacities that will be useful in our daily life,” another interviewee added.

Moreover, the involved participants met people from various backgrounds, discussed diverse topics and built significant relationships. The majority of the interviewees had contacts and built friendships after the end of the program, planning to meet in person in the near future.

All the interviewees would be happy to take part in future experiences of virtual exchange. “Virtual exchanges are the future, it was easier and more interesting than I expected. I will take part in the program again,” an interviewee explained. Young people who took part in our research confirmed that this experience expanded their communication, teamwork and problem-solving skills. Many confirmed that they mainly used the English language, although other languages (like German, French, Italian and Arabic) were also used by the participants.

Some of the interviewees highlighted problems related to the internet connection or completing their video projects. Others outlined that topics related to the migration crisis in Europe, for instance, could have been tackled in greater depth during the sessions. “Only one of the participants in my group was previously involved in policies concerning refugees. No one among the Europeans who took part in the program had clear ideas on asylum seekers and refugees. It would have been useful to discuss with experts in their countries on this topic,” one of the interviewees said. Furthermore, a specific interest was highlighted for a possible discussion on migration policies and on the media representation of international events by local media outlets.

The youth of the Mediterranean will feel closer through projects of virtual exchange overcoming the traditional formula of the Erasmus programme. This initiative opens the doors to a still-unexplored possibility — how to study topics of common interest and current events, including the migration ‘crisis’, that involve the two sides of the Mediterranean Sea. Virtual Exchange is now a reality, and it aims to overcome economic and political barriers to the mobility for young Europeans and North Africans. This pilot project aims to reach 16,000 young people by the end of 2019 and to develop a comprehensive strategy for successful integration of virtual exchanges in both formal and non-formal education in the 2021-2027 Erasmus programme. A community of facilitators, that is virtual exchange alumni and youth workers who are trained to facilitate online dialogue sessions is growing, with 265 having already participated in facilitation training. Youth organisations and universities are training to develop their own grassroots virtual exchange projects which, with the support of Erasmus+ facilitators, will both complement and enhance their international mobility and educational programs, by equipping young people with the curiosity and skills to constructively engage with difference and build meaningful relationships across societies.

Our next Digital Talks: Understanding conflict in the midst of urban riots in the USA by Fabio Andrés Díaz, Colombian political scientist & Researcher will be on June, 17, 5pm CET.