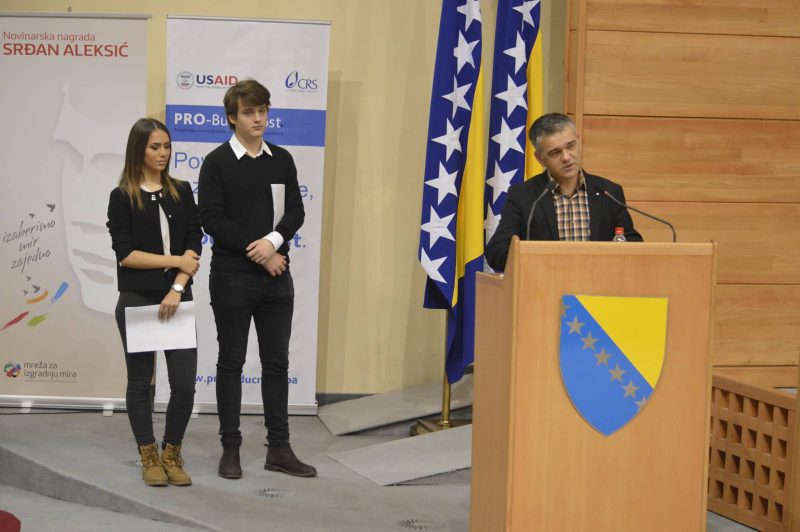 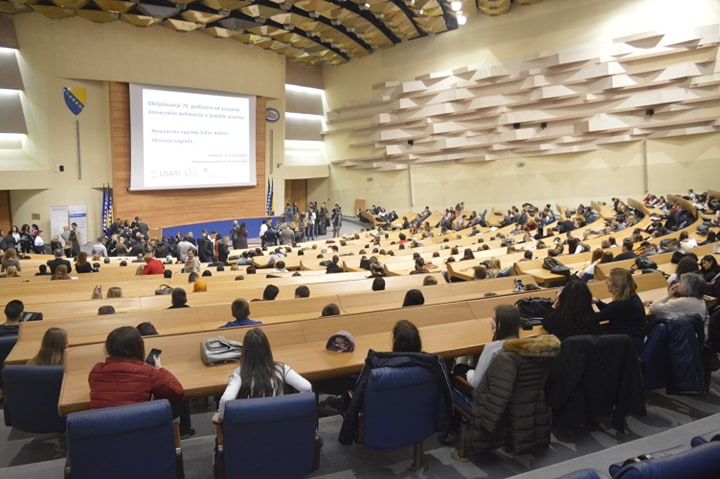 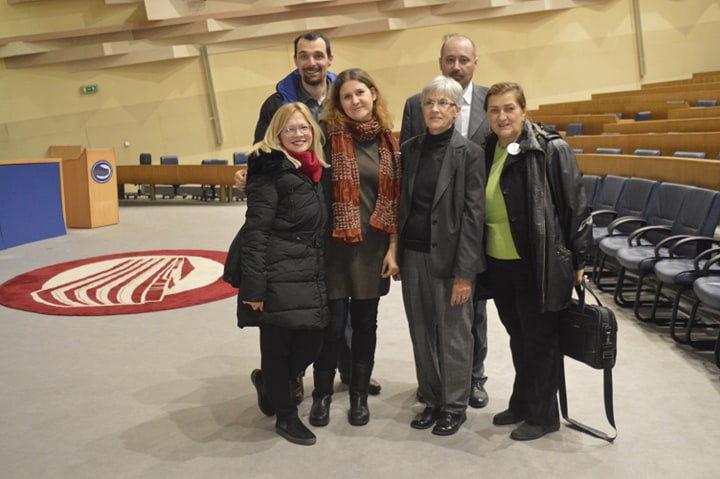 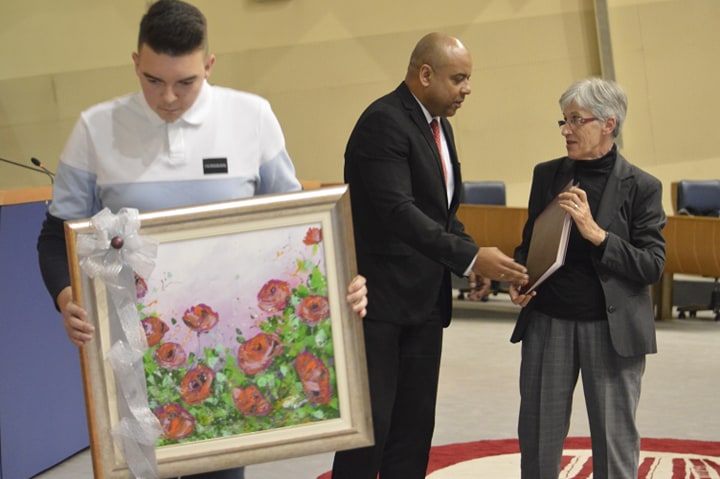 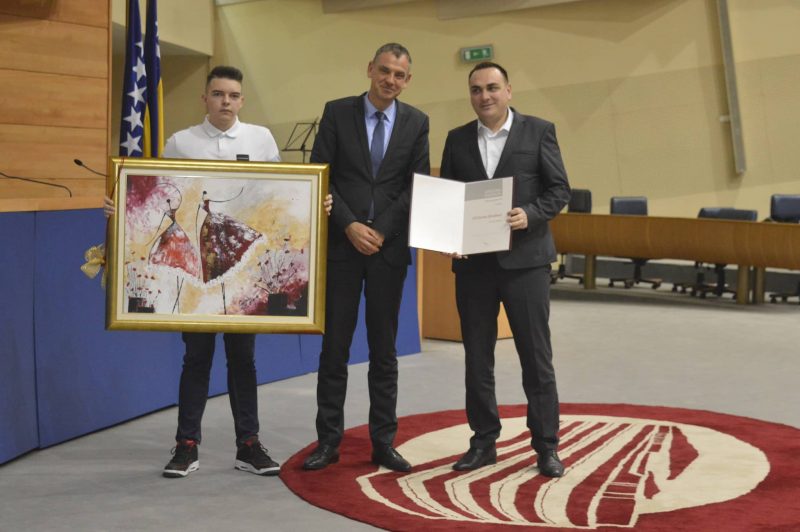 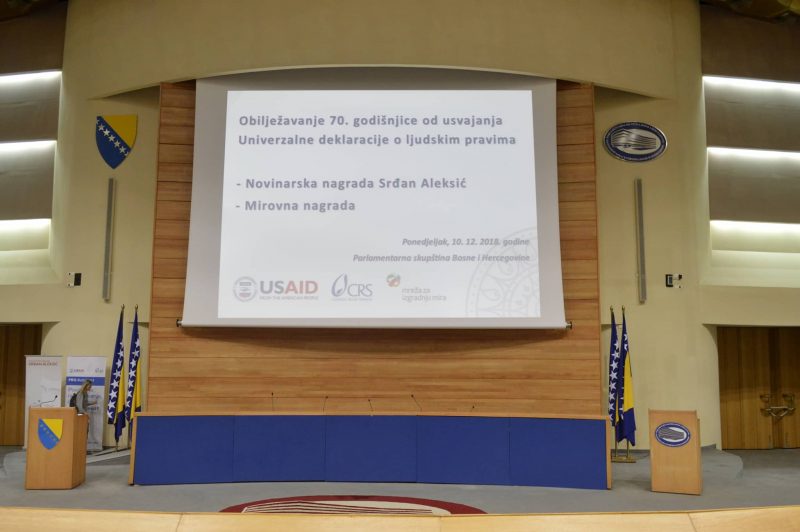 As part of the 70th anniversary of the adoption of the Universal Declaration of Human Rights in Sarajevo, at Bosnia & Herzegovina (BiH) Parliament with 500 guests, the Network for Building Peace and the USAID’s project PRO-Future awarded the “Srdjan Aleksic” journalist award and the Peace Award.

The winners of the “Srdjan Aleksić” Journalist Award for 2018 are Djenana Kaminic-Puce from Television N1, two journalists: one from from Radio Free Europe, Maja Nikolic, and another from BH Radio 1, Mirela Hukovic-Hodzic.

The Peace Award was also awarded, and this year’s winners were Jasminka Drino-Kirlić,  a teacher and an activist from Gornji Vakuf-Uskoplje and Primary school “Dositej Obradović” from Doboj. The special award winners are Cedomir Glavas, Bratunac-based activist and the House of Good Tones from Srebrenica.

The journalist award “Srdjan Aleksic” is given away for continuous professional reporting on marginalized and vulnerable groups within the Bosnia society as well as for the development of socially responsible journalism.

The award is named after a young Bosnian Serb Srdjan Aleksic who saw his neighbor, an ethnic Bosniak, being harassed by a group of Bosnian Serb soldiers at the beginning of the 1992-1995 war. He tried to protect the man but the soldiers then turned against Aleksic, beating him with their rifle butts until he fell into a coma. Aleksic died a week later at the hospital.

According to the jury’s elaboration, N1’s Djenana Kaminic has continuously monitored and reported on the lives of ordinary people, searching for positive examples of coexistence, especially in the politically divided city of Mostar and Herzegovina (the often forgotten southern section of Bosnia and Herzegovina).

“With her segments, Kaminic promotes humanity and reminds the viewers that coexistence is not only possible but that we are already living in coexistence. Her stories are often an inspiration to other media to deal with the same or similar topics,” the jury stated.

For the second time in a row, journalist Maja Nikolic won the “Srdjan Aleksic” award with an explanation from the jury that her stories about minority, marginalized and vulnerable groups of Bosnian society are socially responsible and that she continuously finds people who prove that differences are not an obstacle, but a treasure.

BH Radio 1’s Mirela Hukovic-Hodzic was awarded for her stories about present-day Srebrenica (where the genocide took place during the Bosnian war, 1992-1995), which she presents through the eyes of youth who openly and emotionally speak about overcoming every-day hurdles in order to build themselves a better future in this town.

By establishing this award, the coalition of 165 civil society organizations and schools from across BiH, which made up the Network for Building Peace, wanted to give recognition to individuals and individuals who, by their work and personal example, demonstrate how peace and peace is cultivated in this area, how to cultivate a culture of dialogue and nonviolence, and how to improve the social and economic life of Bosnia and Herzegovina.

Since 2016, the Peace Award has been awarded to primary and secondary schools through its work to emphasize education for peace, human rights and solidarity and participate in improving the life of the entire local community.

In the society in which we live today, where many values ​​are shaken and distorted, more than ever BiH requires educationally-based peacebuilders. The winners of the Peace Award are just that – those who show us that, apart from the various obstacles and challenges that they are faced with in Bosnia and Herzegovina, they are steadily working to achieve social justice and peace, inter-ethnic and inter-religious solidarity.

This year, 25 schools and 20 people were nominated for the Peace Award.

After considering all the applications and based on previously established criteria, the Commission of 15 persons awarded Jasminka Drino Kirlić from Gornji Vakuf – Uskoplje, a longtime activist who worked for 41 years of her life in high school education, in a broken and divided environment, where she founded and managed a Youth Center. She supported young people, women, families of missing persons, and she shared her experiences with women from Ukraine and Syria.

In the category of schools, the Peace Award for 2018 is awarded to the Primary School “Dositej Obradović” from Doboj. This is a school that is proud of its multiethnicity and multiculturalism, where it joins not only constituent peoples but also numerous minorities where all children feel equal, secure and protected. As one parent said, this is a school of friendship, peace and tolerance.

A special award was given to longtime peace activist Cedomir Glavas from the organisation Odysseus from Bratunac. Cedomir was the founder of the organisation Odysseus where he settled as a refugee. Because of his work he was subjected to physical violence, but he only further strengthened his intention to be an activist and true human rights fighter, confronting the past and creating positive peace in his work with the young people.

The Commission has decided to award the Special Award this year to the House of Good Tones from Srebrenica. Through their work, children and teenagers have a protected environment where they have the opportunity to access art and culture, encouraged to have intercultural dialogue, understanding and joint cooperation that will strengthen their participation and chances in society. Music is used as a means of creating reconciliation and better coexistence, bringing people from different ethnic groups together and thus changing the whole community.