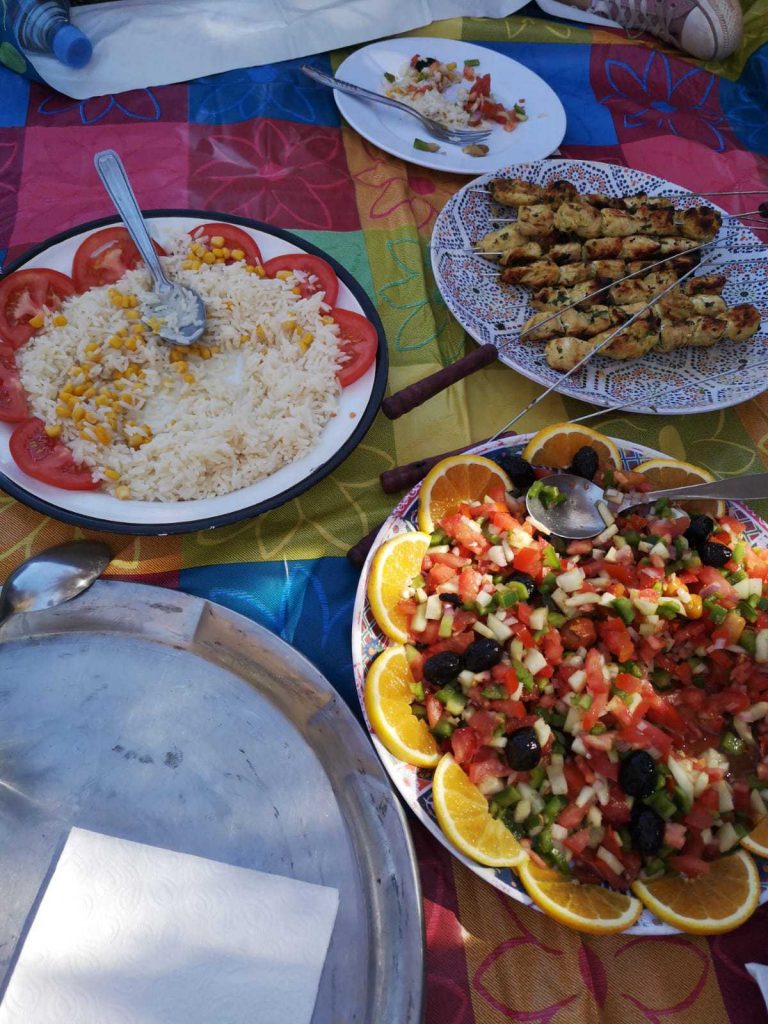 We often hear that too many cooks spoil the broth, but a national food identity in 2020 is exactly the consequence of centuries of cooks contributing to and collaborating in cuisines. Consider the examples of the curry as a national dish of Britain or the European dessert influences on American breakfasts. National food identities are a melting-pot of intertwining cultural influences. This historical evaluation of Algerian Food seeks to unearth the deeply rooted multi-cultural influences on Algerian food composition.

If “we are what we eat”, then it is paramount to briefly examine how consumption informs identity. Food often goes unnoticed because it is a component of our everyday life, however, food is an undeniable symbol of cultural identity. Food anthropology is a subtle way to trace the symbolic and historic impact of food on identity and culture. Ingredients, food, and recipes can be direct cultural artifacts from the past if sourced organically. At the same time, food is subject to continuous change as it is absorbed and used in everyday cultural environments.

Foods’ versatile identity allows us to explore how a country like Algeria, on the cusp of the Mediterranean sea and at an axis of the Northern and Southern hemispheres reacted to great cultural exchanges as well as traumatic colonial exposures to violence. Algeria’s food history is an example of active strength and resilience rather than of mere passive absorption and acceptance.

The ingredients of Algerian food identity is the amalgamation of the historical meetings and cultural heritage of the following:

Resilient; The Amazigh’s preservation and use of couscous, meat & smen (fermented butter) have survived for thousands of years in Algerian cuisine.

Variant: The Romans were bearers of fruits, olives, and nuts which diversified traditional recipes and food combinations.

Heighten: The Arabs imported ingredients that were available all year to ameliorate taste. They heightened the taste of organic and seasonal produce in Algerian cuisine.

Adaptation: The Turkish influence permitted the circulation of luxurious and innovative recipes from the royal kitchens. Algerian cuisine adapted variations from the Ottoman originals.

Elaborated & Fine: The French inclusions in Algerian cuisine are still as elaborated and fine as recognized worldwide.

Firstly, Algeria’s food origins are based on the resilient and steadfast nature of the indigenous Amazigh people. Their cuisine primarily used ingredients like corn, barley, goat, fermented butter, honey, and wheat. Semolina, a product of durum-wheat is at the heart of both savory and sweet cuisine in Algeria and the rest of North Africa. This legacy still lives on to this day, and wheat is one of Algeria’s top 10 exports.

Couscous, the main star of North African cuisine, is made with semolina and durum wheat. The original version of this dish was initially topped with hearty meat and downed with ewes milk.

At the base of most dishes still to this day is Smen, a fermented butter used to moisten couscous to a buttery consistency, initiate the marinating of tagines, and for a distinct dessert flavor found in Tamina (sweetened semolina, orange blossom, and smen), Makrout (a semolina smen cookie filled with dates) & Kalb el Luz (‘the heart of the almond’ is a semolina, smen and almond pudding type dessert drenched in syrup).

Khobz, (Bread) lies at the heart of Algerian cuisine, hospitality, and status. An excess of bread on the dining table signifies financial stability, and the type of bread tells many stories. Over the centuries, transnational meetings increased the variety of bread and butter available; wheat bread is basic but appreciated, semolina bread nutritious, French bread sings prestige and wastage, and homemade bread Algerian hospitality and health.

Secondly, Algeria’s position saddling the Mediterranean sea meant that it was soon absorbed into the expanding Roman Empire. Algeria experienced its first major contact with the West, and the country’s cultural identity had a taste of Mediterranean globalization via the Romans. Mediterranean migration and trade fostered the cultivation of imported olives, vegetables, and fruits such as oranges, plums, and peaches.

This enriched Amazigh cuisine as indigenous maidenheads, although defensive at first against the invaders, later experimented with the imports. Traditional dishes incorporated the fruits and olives in a varied mélange. The Romans were kings at cultivating fruits during their appropriate seasons, and Algerian cuisine and hospitality absorbed this virtue. To this day, traditional dinners end with a colourful serving of seasonal fruits and dates.

Lham lahlou (Sweetmeats) is a dish for those unafraid of boundaries, the meat is drenched in a sweet syrup marinated with cinnamon and orange blossom, dried apricots, prunes; raisins are added to soften, and almonds are used to garnish.

Western Algeria and neighboring Morocco preserved the sweet variation of couscous drenched in buttermilk, aromatised with orange blossom, and crystallised with sugar.

The import of vegetables like courgettes, parsnips, onions, and carrots were soon included in variant tagines and couscous sauces. Olives were heavily showcased, and they soon got their own dish Tajine Zitouna (Olive Tajine).

Thirdly, as the Roman Empire disintegrated, a new power ascended – the Arabs swept North Africa. The Arabs brought with them potent ingredients such as varied spices from India, the kingdom of spices, and coffee granules and brewing from Yemen. Grains like lentils, fava beans, and chickpeas increased the diversity of foods available and sustained multiplying populations. The Arabs kindled an explosion in Algerian cuisine and heightened the flame of its potential.

Ras-el Hanout (Head of the Shop) is a signature mixture of spices composed in North Africa. Although there is no one combination, the versatility of the spice mixture elevates the flavour of soups, tagines, and meats. Arab imports developed the complexity of Algerian food.

Mint Tea (šāy bi-l-naʿnā) is a staple in Algerian life, before dinner, after dinner, when guests are over for dinner and instead of dinner (if one is sick), Mint tea is brewed with tea leaves from central Asia and China, a direct result of the Arab Abbasids’ contact with China.

Chickpeas began to feature in as many dishes as possible including soups, tagines, couscous, and it was not long before the Arabs in Andalusia inspired Algerian snack food. The Torta de Garbanzo inspired Garantita, a chickpea, egg, and water-based omelette.

Fourthly, as Ibn Khaldun theorised in Al-Muqaddimah, all societies rise and fall, and as the Arab control dwindled, the newly organised Turks stepped in to fill the void of Islamic hegemony and legacy. The Royal Ottomans at their peak of power experimented with different luxuries including recipes, these new dishes then travelled across the empire. The traces of food uniformity are seen to this day with food legacies still present across the Balkans, Central Asia, and North Africa. The Ottomans also elaborated the traditions around coffee brought by the Arabs and established the recognisable coffee culture through cafes.

Algerian Dolma, meaning to fill in Turkish, shares origins and ingredients with its predecessor but was adapted. This highlights how by the Renaissance, Algerian gastronomy had enough confidence to adapt recipes rather than absorbing them whole. Algerian Dolma is a combination of vegetables like potatoes, courgettes, parsnips, and tomatoes stuffed with seasoned mincemeat and ladled with a white chickpea sauce.

Bourek is a delicious snack that reminisces the trans-national connection Algeria has with the Balkans, Turkey, and Greece. Although altered and rolled rather than layered like in its country of origin, this Ramadan favorite is normally filled with potato, mincemeat, and egg, but other variants are available.

Fifthly, the arrival of the French was a hugely traumatic and a recent meeting, unsettling the vast majority of the population. The influence of French cuisine is mostly appreciated in hindsight as refined patisseries and the French baguette were rarely eaten by the Algerians during the colonial years but are now available readily and used for special occasions, such as Eid, Birthdays, and other Celebrations. These colonial remnants mean that French cuisine is often seen as a sign of status. The French infrastructure left behind patisseries and dessert shops for the French citizens of Algeria. These sweet paradises developed to sell the coalescence of Amazigh, Arab, and Ottoman desserts.

Milles feuilles is admittedly a dessert the Algerians are glad to call their own despite its place among French desserts. It is an indulgence very distinct from the other almond, semolina, and honey desserts with its rich crème patisserie, thin pastry, and sweet fondant.

Baguettes were a food component added to the repertoire of bread in Algeria. The Algerians have a long love affair with bread, dating thousands of years; bread could easily be part of their DNA and there is a production of 70 million baguettes a day.

If ‘you are what you eat’ as the famous saying goes, then it cannot be denied that the identity of Algerian food is one of resilience, flexibility, heightened strength, adaptation, and elaboration. It all boils down to the fact that cuisine informs identity and customs, much more than admitted. In the case of Algerian cuisine, too many cooks didn’t spoil the broth, or the couscous, or the desserts, or the bread…