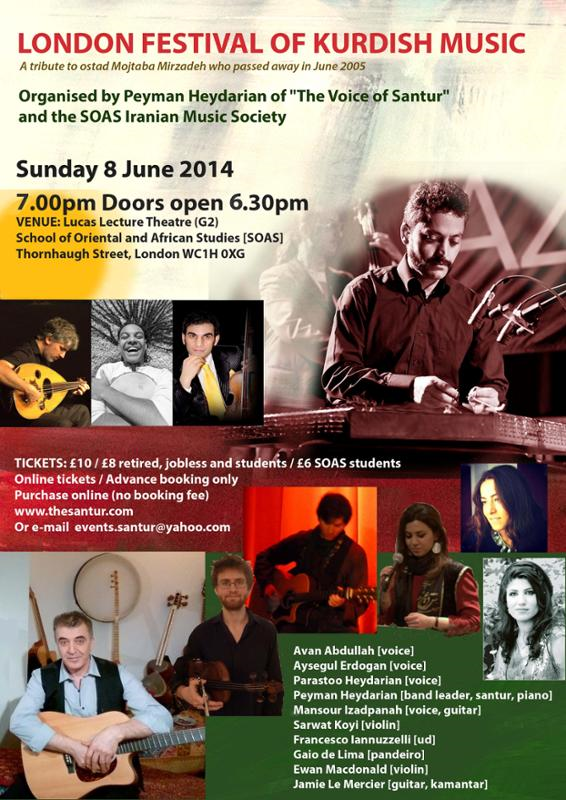 Flyer of the event, the 4th festival of Kurdish music in SOAS.

Following a random invitation by an oud enthusiast, I found myself attending the London Festival of Kurdish Music by the SOAS Kurdish Band and Peyman Heydarian. Although, often receiving many similar invitations, I generally do not attend such events due to workload. However, I was familiar with the oud player, Francesco Iannuuzelli, who is currently offering oud lessons through the Arab-British Centre and after a little persuasion from one of Francesco’s students, I decided to give it ago.

While as a student of the Middle East (long ago now!), I had a particular love of Halk music from Turkey and its’ borders of all kinds, whether it be Village, Kurdish, Cerkes or from one of the other ethnic group that Turkey is lucky to have within its’ borders.

The London Festival of Kurdish Music, held in the Lucas Lecture Theatre, enjoyed a packed out audience. Throughout the evening, the Musicians: led by Peyman Heydarian, on the Santur and Piano; Mansoor Izadpanah, on the guitar; Sarwat Koyi on the violin; Gaio de Lima on the pandeiro; Ewan MacDonald on the violin; Francesco Iannuuzelli on the oud; Jamie Le Mercier on the guitar; as well as singers Avan Abdullah; Aysegul Erdogan; and Parastoo Heydarian: treated the audience to a tremendous feast of traditional Kurdish and Middle Eastern musical culture, while adding their own original flair to the evening.

Although familiar with the santur, it was the first time that I had ever seen the instrument in action. For those who may not be familiar with the eloquent apparatus, the santur is a stringed trapezoid shaped instrument, and is part of the hammered dulcimer family of musical instruments, which are played throughout the Persian Gulf, India, Southwest Asia and even parts of central and eastern Europe. The player uses mezrabs, a type of mallet with thin curved ends, to twang the santur, which releases a sound similar to a xylophone merged with the strumming of a violin. Peyman Heydarian proved himself to be a master of the instrument throughout the evening.

Furthermore the singing combinations of Abdullah, Erdogan, Heydarian and Izadpanah, were soulful, engaging and powerful. It made me wish I could understand Kurdish and not just a smattering of words, to further appreciate their message. In particular, Parastoo Heydarian’s rendition of Ey tir, which translates into The sorrow of your love is like a bullet in the hearts of the lovers, an old Persian mystical love song, was enchanting.

The real surprise of the evening though was Gaio de Lima and his pandeiro, especially his ability to sustain the movement and add a samba flair to traditional Kurdish harmonies.

I would recommend everyone should attend at least one Kurdish concert, especially one by the SOAS Kurdish Band, whether they are a music lover, interested in culture or just seeking to fill an evening. It was definitely an evening to remember.