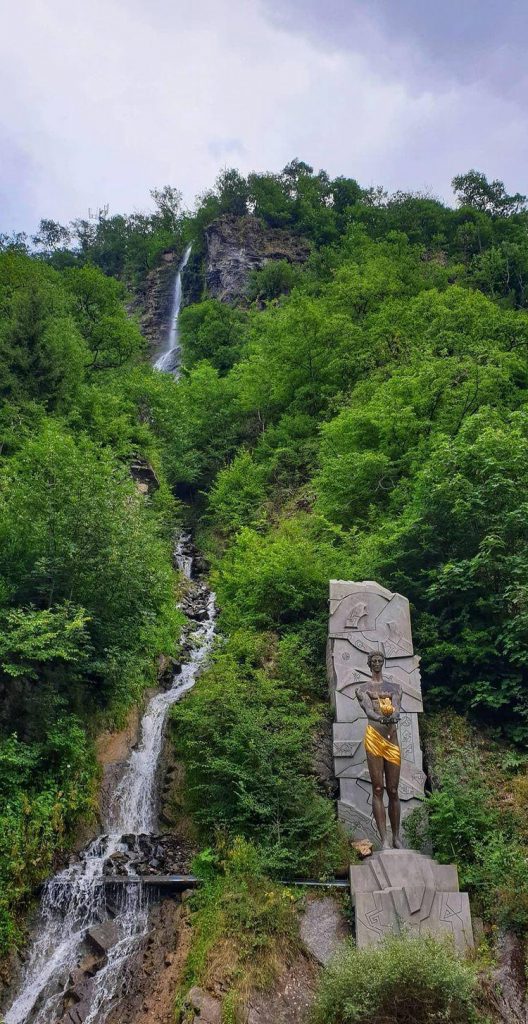 Myths as part of the national identity of the Caucasian People

National myths are part of the genetic code of every nation. The 19th century saw the rise of nationalism as many nations sought their national myths, finding connection with their glorious past through historical continuity. Even today, national myths play an important part in nation-building. For example, many Serbians are proud of the Kosovo-myth as part of their national identity. It tells stories about Serbian noble heroes fighting against the Turks on Kosovo Polje.[i] Ukrainian identity draws upon the Cossacks as a symbol of bravery and good governance.

The Caucasus is a region bordered by the Greater Caucasus Mountains in the north and the Lesser Caucasus Mountains in the south. Through this article, we go on an epic journey among the people of that region. From the Kartvelian people of the Black Sea Coast to the Circassians and Ossetians of the northern mountains, we look into their folkloric heritage and ancient beliefs. Although Caucasian folklore and mythology share a resemblance to ancient Greek mythology, it is unique in its own way, reflecting the ethno-geographical side of the region. In some ways, it is argued that the folklore of the Caucasus has had influence from the Greek Colonists. Judging by a deeper anthropological context, a more plausible scenario is that of contact between the early Indo-Europeans and the North Caucasians and Kartvelians.[iii] The Ossetians belong to the Iranian group of people, together with the Persians, and the links between these tribal archaic cultures are evident in their mythologies and customs. It is not surprising that the Russian academic Yuri Zhdanov named the Caucasus as “Eurasia Solar NarPlexus“,[iv] a region connected in essence with its diverse neighbouring cultures, peoples and civilisations.

A great array of anthropologists and researchers (P. Autlev, M. Talpa, I. Treskov, A. Shortanov) have written about the folklore and religious beliefs of the Caucasian people. According to them, every nation in the North Caucasus has its own variant of heroic epos, known as the Nart Sagas – mythological tales closely resembling other archaic epics such as those of ancient Greece. It is necessary to consider myths, the Nart Sagas and other forms of folk imagery when trying to understand the corresponding cultural-historical context. Academics have noted that neither Christianity nor Islam influenced the ancient beliefs of the Abkhazians and Circassians, as these groups did not find contradictions between their archaic traditions and their newly adopted religions. The Nart Sagas still exist in their original form and are highly valued even today, and like Christianity and Islam, teach the people of the Caucasus values such as justice, peace, wisdom, endurance and compassion. The dualist struggle between the good and the bad is the main idea originating from the myths of the Caucasus. In the Nart Sagas, the mythical hero can cross the boundaries between two worlds: the one we live in, and the other, the divine realm. It is the hero’s role to make the journey between these worlds and to provide us a broader knowledge of ourselves, the world, and morality.

What is the similarity between Caucasian mythology and Ancient Greek mythology?

Caucasian mythology is a unique blend of ancient polytheistic and monotheistic religions. It comprises an oral tradition that spans across more than 3000 years. Circassian, Georgian, Ossetian and Armenian folklore, among many others, have found its place in this ancient oral tradition. Within this tradition there are many striking similarities with other ancient bodies of mythology, namely the epics of ancient Greece.

Historically, Milesian Greeks colonised the Black Sea Coast of modern Georgia.[v] For the ancient Greeks, this land was at the edge of the known world, revered as one of the pillars supporting it. The famous Greek hero Jason, together with his Argonauts, travelled to Colchis to retrieve the Golden Fleece from the mighty king Aeetes. Indeed, in the present day, Georgia is still famous for its name “The land of the Golden Fleece“. An ancient tradition of gold washing from the rivers of Georgia still exists there, with wool used to trap gold sediments. Was Colchis the promised land for the ancient Greeks, a land of fortunes? We cannot say for sure.

However, Colchis does seem to be the place where Prometheus served his eternal punishment for tricking the gods and giving the fire to humanity. Only centuries later, Heracles, another mythical hero, released him from the chains. Many legends shared in the folklore of the Caucasian people contain motives from the Prometheus myth. The Georgian Amirani, the Vainakh Pkharmat, and the Abkhazian Abrskil were all famous Caucasian heroes that stole gifts from gods, such as the use of fire, to give them to the mortals.

Characteristics of the Caucasian hero

Like Greek heroes, Caucasian heroes possess great courage, strength and special abilities, and play the main role in a typical Mythos quest. They are half-mortals with a god-like status. Take, for example, Amirani son of Dali, the Georgian goddess of the hunt. Removed from his mother’s womb and raised by mortal hunters (Caucasian heroes often have strange births), Amirani grew empathy for humanity. Although they had an almost god-like status, the Caucasian heroes did not enjoy easy lives. God punished Abrskil, the Abkhazian hero, for not obeying him and imprisoned him in a cave. Despite their god-like status and their connection with the other world, their destiny is ultimately human.

Caucasian heroes are not alone in their quest. Vainakh Nart Sagas, from groups in the North Caucasus, tell us the story of Pkharmat, often considered the most important hero of all the Narts. Stealing fire from the gods would not be possible without his close friend and companion Turpal, the mythical horse. Similar to the Greek Pegasus, Turpal is a horse with supernatural skills, faster than lightning. Turpal means ‘hero’ in the Nakh languages of the North Caucasus, revealing the significance of this mythical beast.

Nart heroes are the brightest phenomenon of the Circassian’s (or Adyghe) spiritual culture.[vi] For the Circassians, the hero possesses those features which are the most valuable and ethno-specific, allowing him to survive in the severe mountainous conditions of the Caucasus. The Nart Sagas are not only epos but also a moral and ethical codex for the Circassians, a role model for society – someone honest, smart and wise, acting in line with the tradition.

The Caucasian Parthenon of deities reflects the ethno-cultural characteristics of people heavily influenced by nature and geographical relief. The Nart Sagas give prominence to Mezitkh, the god of hunting, wild animals and forests. Hunters, as the respected elite, gave importance to the hunting economy and food supplies. The Circassian proverb, “Mazith does not like the one who eats only half“, explains the rationality of the Caucasian people. They must be sensitive towards nature, to protect it and not destroy it. Wasting food is thus an undesirable act. North Caucasian mythology and oral tradition bear resemblance to that of neighbouring Caucasian peoples – the Georgian equivalent of Mezith is Dali, the goddess of hunting, for example.[vii]

One of the most popular deities in the Nart Sagas is Paco, represented as an evil deity, patron of atmospheric phenomena.[viii] In the Nart Sagas, he blocks the path for heroes, forcing them to offer gifts to him. The Georgian depiction of this evil deity is the Dalis, gnome-like creatures living in caves, storing treasures and holding captives.

Caucasian myths bear great similarities to both Greek and Persian mythologies. For the ancient Greeks, fire symbolized wisdom and knowledge. Persians considered fire as the element of purity, representing the light of God. In pre-Christian Georgia, the worship of fire was common. The Chiakokona is a fire ritual still practised across Georgia.[ix] Jumping over a fire brings good luck and purification.

The Caucasus is a mountainous region with mountains stretching from the Black Sea in the west to the Caspian Sea in the east. For the Caucasian people, mountains represent holy places. These are epic settings in which heroes can cross from the mortal world to the divine. They simultaneously represent stillness and the places of punishment. Ararat, with its prominent peaks visible from Yerevan, embodies a national symbol for the Armenians, the final resting place of Noah’s Ark. Although it is located on the Turkish territory, it can be seen from the Armenian Highlands across a great plain. Its cultural significance predates Christian Armenia, when it was the home of gods, similar to mount Olympus in ancient Greece.

A Caucasian eagle is a common figure in ancient Greek, Georgian and Circassian mythologies. For the ancient Greeks, the eagle is a holy bird representing Zeus and the sky gods.[x] According to the ancient Greeks, Zeus took the eagle and gave him god-like status, representing a good omen of victory. The Aetos Kaukasios, or the Caucasian Eagle, is perhaps the most famous Eagle in ancient Greek mythology representing strength and fearlessness. Bghezh, the eagle, is one of the mythical beings of the Nart Sagas of the Circassians. He is one of the main opponents of the Narts, building barriers to their quests and often kidnapping young girls to challenge heroes to duels. This in turn resembles the duel between Heracles and the Aetos Kaukasios. Moreover, similar to the Greek beliefs, the eagle represents characteristics that are positive and well-regarded in everyday life.

The mythology of the Caucasian people bears the DNA of archaic religious-mythic ideas, archetypes and symbols. Tradition in this region has an ancient history rooted in the tribal cultures that existed across the Caucasus. Rich archetypal images reproduce traditions through generations, still alive among the people of the Caucasus.

We can draw a parallel between the Greek, Persian and Caucasian mythologies, which most likely comes from ancient ties between the Indo-Europeans and other Caucasians. Mythological belief played a crucial role in the everyday life of the Caucasians, and with its symbols, heroes and sagas, it is part of the cultural heritage of groups such as the Kartvelians, Circassians and Ossetians. Gods and heroes reflect the mentality and character of the men and women of the Caucasus, their unwavering spirit and bravery, loyal to their traditions, but rebellious and belligerent against injustice and immorality, fighting on the side of the good. The Narts were the most fierce hunters and warriors, and remain a moral lesson for the Circassians today – in the same way King Arthur and the twelve knights are for the English.

[iii] Duvakin, ‘Greco-Latin-Caucasian Relations in the field of Mythology on the Eurasian background’, [website], <https://cyberleninka.ru/>

[ix] B. Mosia, ‘The Symbols of the Fire in Georgian Folklore in Comparison with Global Experience’, Journal of Literature and Art Studies, [website], <http://www.davidpublisher.org/Public/uploads/Contribute/550fa4a4cb776.pdf>, accessed 3 November 2020.